Day 9: The Purpose of the Splint 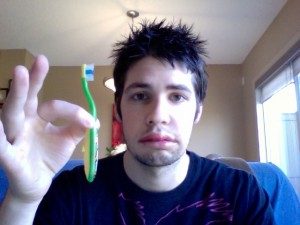 My sidekick. Ages 2 and up.

Edit: I just got back from my doctor. My bottom teeth were most definitely not in the splint properly. He said they were out by 1/4 of a millimeter. Apparently swelling sometimes causes things to move around. All I know now is that I’m much more comfortable, but my jaw is throwing hissy fits like no other. The codeine and ibuprofen I just took are starting to kick in though. That must mean it’s nap time…

I had a dream about eating bacon last night. That is just plain cruel.

Have you ever noticed the sheer number of commercials that are about food? Or how much time people spend talking about food each day? It’s uncanny. What about how simple your eating habits are as a student? My parents seem to make steak and salmon dinners several nights a week. I think when I’m able to eat again, I may commit to driving 45 minutes each way every night after work just for a bite to eat. Seriously.

In other news, both of my lips have officially shed a layer in their entirety–like a snake. I’m not sure if that’s expected or not, but it happened. Vaseline has become my new best friend.

I’ve also become surprisingly decent at the game of Crib. I’ve skunked my father 3 times and my mother once in the past few days. We tried playing Scrabble, but my vocabulary just isn’t extensive enough to elicit any joy at all from that game. I need mathematical games. I think Backgammon is next on the list. Or maybe Chess.

I’m still spilling every now and then when I eat and drink. I was drinking water yesterday, for example, and felt it running all down my shirt. I became quite frustrated and ran to the bathroom to see what the problem was. When I looked in the mirror, I realized the syringe wasn’t even inside my mouth. I was literally spraying water down the side of my face. Oh, the joys of being completely numb!

I can now eat soup quite effectively. This is a wonderful thing, because a full can of soup along with a can of whole milk is almost 400 calories! My process generally unravels as follows:

The bad news of my day so far is that my jaw feels like it’s set improperly with these new elastics. I didn’t sleep a wink last night (except for my 5-minute bacon dream, of course) because my bottom teeth were grinding against my splint and the muscles in my jaw were spasming all night long. I’m heading back to my surgeon right now to get it looked at again.

Okay, now for the educational part of today’s post: the purpose of that horribly hindering splint. Part of the surgery I underwent involved widening my top jaw quite extensively. Since bone was removed, the muscles in my mouth would naturally force my top jaw to reshape into its previous state. The splint is inserted to keep the jaw widened. In 7 weeks, I have an appointment with my orthodontist. She will kindly remove the splint, only to replace it with a metal appliance that will sit in the roof of my mouth serving the same purpose. I’ve been informed that the appliance is removed after 3 months because, at that time, the bone has filled in, and the muscle isn’t strong enough to overcome bone. It’s similar to having to wear a retainer after a person has their braces removed. If they don’t, their teeth will migrate right back to where they came from.

I learned something quite amusing this morning as well: dogs, much like children, cannot understand what I’m saying. When I call my parent’s dog, Abbie, I receive no response. I can call her 10 times. Nothing. If anyone else even whispers her name, she jumps up and comes running over. Silly puppy.