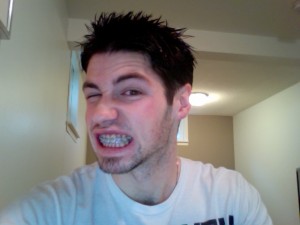 Guess whose teeth are touching… sorta!

Have you ever heard of phantom limbs? When someone has a limb amputated, they will often attempt to use it ever after it’s gone because their brain has not yet registered its absence. You may also experience this strange phenomenon if you sleep on your arm all night long, thereby cutting the circulation off. There have been many times when I’ve awoken and attempted to turn my alarm off. After a few frustrating seconds, I’ll look down and realize that, despite having felt my arm move to the clock, it really hasn’t moved at all.

With that as my preface, I believe I’ve discovered a new sibling in the phantom family: phantom drooling. Almost every single time I’m taking a drink, I can feel drops of liquid running down my shirt and landing on my pants. When I look down, however, I haven’t spilled anything at all. I guess I’m so used to being sloppy that my brain is expecting me to make a mess.

The left side of my chin has started sending sudden jolts of pain through my jaw. It’s extremely annoying, but it means my nerves are reawakening from their brief coma.

I woke up today and noticed that all of the teeth on the right side of my mouth were touching except for my rearmost molar! I could open and close my mouth and hear the sound of my teeth clacking together. That euphonic sound disappeared about an hour into my morning, unfortunately. I recall my surgeon telling me that, when a person is asleep, the receptors in their teeth stop working. This means that I bite down with full force while sleeping because I’m not afraid of shaving my teeth down or hitting my braces. In conclusion, the reason I can’t bite is because I’m a giant wuss.

I’ve been told by both my surgeon and my orthodontist that teeth naturally grow until they hit a barrier, which is usually your other teeth. Since my bite is open, my molars should migrate out until they touch again, simply because “it’s in their nature”. I’ve never heard of this behavior before, but I’m choosing to accept it on faith alone.

Lastly, let us all note that I am now 2/3 of the way to a fully reconstructed jaw. I remember being told that if I were to get punched in the face after 90 days, it would be just like if it were to happen before surgery because my bone would be back to its full strength. I know what you’re about to say: “Want to test that out, Graham?” No. That wasn’t funny the first time I heard it and it’s not funny now.