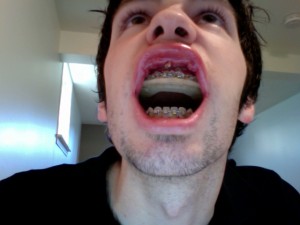 The bane of my existence.

I found some courage and took a very unflattering shot of the splint that I continually whine over. As you can see, it’s fairly large and stretches all the way to the back of my mouth. The grooves my bottom teeth rest in can be faintly made out as well. If you squint a little bit, you’ll notice a little white spec in the center of my top lip. That’s a stitch, and it enjoys catching on my braces. It’s guarding the point where they began slicing the roof of my mouth open. I have a scar running from that point all the way to the back of my throat. It must have been quite the show.

I’m reporting a 0/10 pain factor today! I only receive pain on my own accord now, like when I’m yawning, running or playing sports. If I coast through the day completely emotionless and well-rested, however, I feel virtually no pain! I also knocked the inconvenience factor down by 1 point because, with my elastics off, I can open my mouth wide enough to swallow small chunks of soup. I still can’t chew though.

When my elastics are out, I can speak quite well now (unless I’m trying to say “Reese’s Pieces“). It’s so handy to be able to communicate at work again.

Speaking of work, I had quite a relaxing day yesterday. McAfee Antivirus, in all its wisdom, released an update that accidentally quarantined an extremely important Windows file. The purpose of the file was to load all of Windows’ services upon system start, such as networking and printing. Since McAfee made the file unreachable, any Windows XP computer that was updated lacked Internet connectivity and would also restart itself every couple of minutes, thus rendering the machine unusable. It’s been reported that over 1 million computers were infected worldwide. Think about that in terms of cash: if 1 000 000 employees can’t work, and they’re each making roughly $200-300 per day, that means McAfee just cost companies all over the world over $200 million dollars of damage. Oops.

Anyway, since all of the computers at work were down, we started the morning with a ping pong tournament, followed by a hula hoop lesson. I, unfortunately, lack the hips to master the hula hoop. I lucked out and re-established my dominance at table tennis though. I may not be good at many things, but I like to think I’m decent at ping pong (for a white guy). We also went to the park to throw a Frisbee around and then played cards afterwards. It was like a holiday. Here’s the clincher though: my system actually worked. For some reason, my computer wasn’t infected, so I was still able to work. I joined the festivities regardless. Nobody should be expected to sit behind a computer when it’s 25ºC outside.

In other news, I’ve figured out how to prevent these annoying sneezes that keep coming on: just look at the sun (or at any bright light, for that matter). As long as you’re looking straight up, your sneeze will flee. Brilliant!

I’ve also discovered that my new favorite soup is steak and potato Chunky. I accidentally burned it last night though. Then I accidentally placed the hot pot on our counter and burned a perfect ring into it. But hey, I said I was decent at ping pong, not cooking.